Every once and awhile you need to take a road trip and experience what this great country has to offer you. If you are lucky enough then you can take your time and explore some of the great things that are out there. So, while we had to do a cannonball run up to PA and back, it was without a doubt a fun trip filled with adventure and laughs.

Initially I was going to travel alone as I could not find anyone to travel with me, then my good friend Natasha from Making Natasha a Spartan said she has nothing else going on and since we choose to LIVE OUR LIFE, off we went.  Life is too short these days and without knowing if another opportunity like this would ever happen for her, it was awesome she wanted to go.

ur first state was Louisiana. We stopped in Shreveport first and we had a few items we needed to see, so off we went! Here is our list:

The other highlight of this city was see what is claimed to be the only “World’s only Tattoo School”. I am not sure about this one and I can’t make this up I swear, but this little jewel deserves its own photo, well just cause it makes you think about who would actually go in and get tattooed by one of these “students”? I had an apprentice give me a tattoo once and I had to have it redone because it was so bad and looked nothing like the picture I had picked out. Needless to say we did not get any new ink! 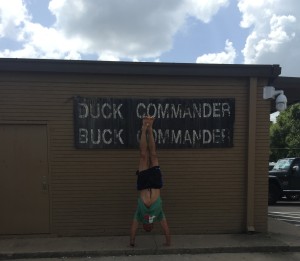 We then made our way on to Monroe, LA and no road trip would be complete without seeing the Duck Dynasty place. It was shocking how it was the same building you see on TV. The loading docks and everything. I was not surprised that they sell everything under the sun in products. They have their label on just about everything there.

So the only cool thing we stopped to see here was the great Mississippi River. Oh and there was a cool ass cannon at the top of the hill too! Otherwise there wasn’t really any cool roadside attractions we found on our route. 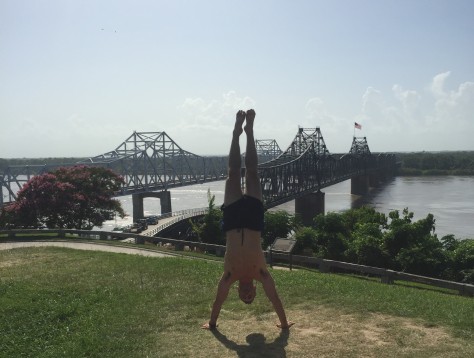 Sorry Alabama, but we kinda flew through your state and we didn’t stop to see anything. Not that we didn’t have a couple of items on the list, but by the time we got to Birmingham, everything was closed and it was dark out. But we did have these two places…maybe next time.

Traveling at night through a state makes it very difficult to actually experience anything. Especially when you are driving in the wee hours of the night.  On the return trip it was more of the same, we entered the state in the early morning hours and left at 0600.

Sorry Virginia, while I am sure you have a lot to offer since you are made for lovers, we were on a mission to get to Phily to see some cool stuff.

Your morning traffic sucks! We didn’t see much because of it.. I know you have some cool stuff and things, maybe on a different trip.

The only non state we visited, we drove right though and waved. I will admit that I did hold my breath through the Fort McHenry Tunnel, just to see if I could. I did and I didn’t pass out thank goodness!

I think I sneezed and we were already out of the state.

PA how I am growing to love you. I don’t think I had been to PA since I was 16 and now I have been there twice within a months span. Opposite ends of the state but I never thought I would say I was in Philadelphia and Pittsburgh (even if Pitt was just the airport).

So off to Phily and yes I had to refrain from yelling “How ’bout them cowboys!” for the fear of being stoned by batteries! But none the less we were able to take in a few sights.

“Have you seen a big bell around here? It has a crack in it, maybe bronze in color?”

I am having a hard time finding this to the city of brotherly love when people drive in walking lanes, almost run over a man in a wheelchair and don’t give a crap.  One of the other funnier moments in the trip had to be when I was trying to find the bell and I casually say, where is this damn bell and Magellan responds with “what smell?” Oh that’s great, the wax in your ears is working perfectly! (she had an ear infection and put wax in her ears) It reminded me of my grandma who was hard of hearing and never heard anything correctly…so this became the new joke of the trip, yes I can’t ever let anything go.

At this point there is only one last thing we need to get before we can take off and make the final destination…you guessed it, the Philadelphia Cheesesteak sandwich. So I asked a local where we should go, the suggestion was “the best” in the city a small place called Jim’s. So we ventured a few blocks and found said Jim’s. Now the first thing you need to know about Jim’s is that they are cash only, well it is a good thing they keep an ATM in the lobby for losers like us who NEVER CARRY ANY DAMN CASH! So we get the sandwich and head upstairs to eat. Now I am not going to say it was a bad sandwich, okay it was a horrible sandwich, I think I have made better ones myself! It was dry and needed salt as it was tasteless. Anyway I am sure it was the best cheesesteak in Philly at one time, actually I know it was, they had a plaque on the wall, “Best Cheesesteak Sandwich, 1979” so there you go, in 1979 they ruled this place!

What can I say, this is probably a totally different blog post because this was a different kind of race I have not experienced in a long time. So lets just say, I participated in two races and I completed two races and they were on a ski resort. Made me kinda wish it was the winter time again so that I could ski!

So during our trip my shotgun rider took sick and we had to take her to the ER on Saturday and combine that with some family issues going on in Texas, we bolted right after the race on Sunday to get home as soon as possible. For the most part we took our state sign selfies to add to the collection, had another late night waffle house experience and got a speeding ticket!

Here are the states which were traveled through…nothing exciting except for rest stops and fuel. The bandit was on a mission, had to get back to Texas, family was waiting.

But…that is not to say we didn’t have a few highlights along the way, yes we truly are a comedy of errors and you can’t say that I won’t show you a good time.

Speeding 85 in a 70, we were advised that anything 85 and over is considered reckless driving in the great state of Virginia. Which carries a $2500 fine and or Jail. He also advised he could take her to jail right now if he wanted to. After he leaves I get this “I can’t go to jail Travis, I just can’t go to jail”…ha ha…

He asks for her license and registration. She gives him her license and a copy of her personal insurance. He tells her that is great but he wants the registration. I advise him it is in the window, at this point Natasha grabs the flier from the Spartan race and tries to give it to him. If I had been drinking anything it would have been all over my dashboard. I calmly say, no it is the sticker in the window. To which the response was “they don’t give you a paper copy in Texas along with the Sticker?”

When asked why she was speeding she calmly says she was just keeping up with traffic. I mentioned about how fast she was going to which her response was, “I don’t look at the speed-odometer, I just keep up with traffic”

The best part of the stop was when he goes back to his car and we both bust out out cameras to take selfies with the blue lights in the background. “did you get a good shot?” “No, did you?” “No, I wish he would turn off that stupid spot light!” I think we both took several shots and I can only image what it looked like from the rear, two cameras and arms up taking pictures!

Upon completion, I calmly asked the trooper if he would take a selfie with me, I mentioned it would be the perfect end to our epic roadtrip. He politely refused and told us to drive safe!…Dang it!

So there you have it, after that, it was a pretty calm trip home. We will take with us the memories of this and all of the great state signs that were captured to add to our collection!

So there was as usual a ton of pushback about taking Natasha with me, as people just don’t understand why she does crazy things like this. I am sure I am a hated person as it seems to always be on my watch that the adventures kick in and something arises to cause concern to everyone. So while yes, I can tell you I am greatly concerned about the health of my friend, but sometimes you can’t predict what the future holds for any of us. Any of us could kick the bucket tomorrow and who wants to have regrets? Certainly not me.

While many see this trip as something crazy and hazardous to her health, she viewed it simply as a way to escape from all of the pain she encountered in her life lately. The prior week was filled with heartbreak on a family level. So sometimes people need a good get away to keep their mind off of things. We could never have predicted the complications which lead to taking her to the ER and then checking herself out to get home.

After all of the complications we encountered on this adventure, Natasha has the can do attitude and one comment that will always resonate with me long after she has left us.  When she yelled at me “I am not going to just lay in bed and wait to die!” a cord was struck down to my bones, which although I was very concerned, it made me realize just how much of a fighter this woman was and she is going to live her life. No my friend you are not, your illness does not define who you are and you are going to do whatever you want, even if it does literally kill you one day. Until then, I cherish all of the times we have had and I look forward to many more.

My name is Travis and I talk to strangers!

My Life, My Loves, My Adventures